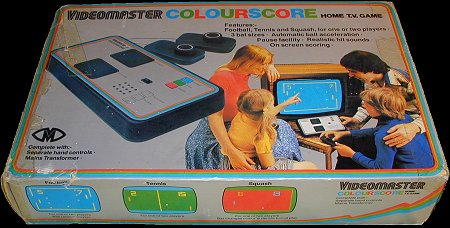 The ColourScore (model VM-11) is one of the first colour systems released by Videomaster in 1977 along with the ColourShot and VisionScore. This model was the most successfull of all the systems released by the company, and was sold in several european countries. This system uses the National Semiconductor MM-57105 game chip and plays three games for one or two players (single player games are played with one controller moving both paddles at the same time). This system has a rather uncommon design similar to the Star Chess game released by the company. David Winter discovered an early sales brochure where the Videomaster ColourScore was initially called Supercolor: although already called ColourScore, the pictured unit still had the earlier Supercolor name and green push-buttons instead of black. This particular unit might well be a preproduction prototype.