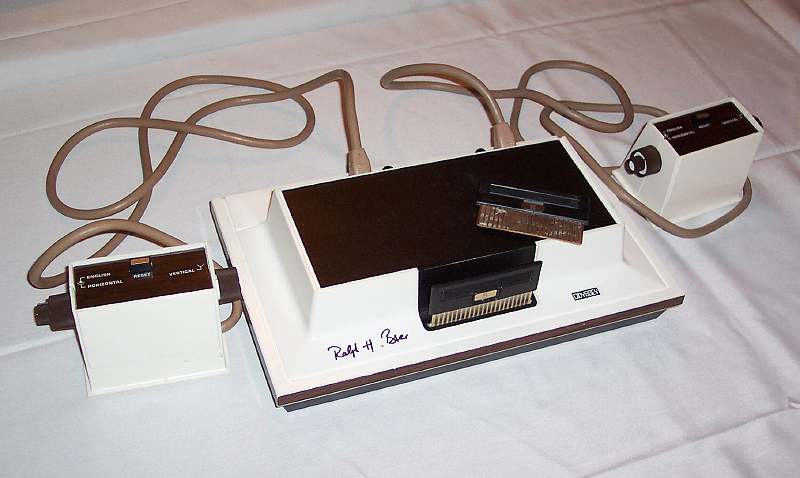 This is a boxed and complete Odyssey in very good condition. It is a 1972 model (RUN 1). The box is in excellent shape and accessories such as game markers and paper money are not even opened or used. I store this in an original outer transport box, which is in decent condition.
Bought from Daniel Grund.

The Magnavox Odyssey is the world's first home video game console. It was first demonstrated on May 24, 1972 and released in August of that year, predating the Atari Pong home consoles by three years.

The Odyssey was designed by Ralph Baer, who began around 1966 and had a working prototype finished by 1968. This prototype, known as the Brown Box, is now at the Smithsonian Institution's National Museum of American History in Washington, D.C..

In 2009, video game website IGN named the Odyssey number 25 in the Top 25 video game consoles of all time.

While many collectors consider the Odyssey analog rather than digital (because of the addition of analog circuitry for the output, game control, and the use of discrete components), Baer has said he considers the console to be digital. The electronic signals exchanged between the various parts (ball and players generators, sync generators, diode matrix, etc.) are binary. The games and logic itself are implemented in DTL, a common pre-TTL digital design component using discrete transistors and diodes. The system was powered by batteries. The Odyssey lacks sound capability, something that was corrected with the "Pong systems" of several years later, including Magnavox's own Odyssey-labeled Pong consoles. Ralph Baer proposed a sound extension to Magnavox in 1973, but the idea was rejected.

The Odyssey uses a type of removable printed circuit board card that inserts into a slot similar to a cartridge slot; these do not contain any components but have a series of jumpers between pins of the card connector. These jumpers interconnect different logic and signal generators to produce the desired game logic and screen output components respectively. The system was sold with translucent plastic overlays that gamers could put on their TV screen to simulate color graphics, though only two TV sizes were supported. Some of these overlays could even be used with the same cartridges, though with different rules for playing. It was also sold with dice, poker chips and score sheets to help keep score, much like a traditional board game. Ralph Baer also proposed the concept of "active cartridges" containing additional electronic components allowing adding more game features such as sound effects, variable net position, variable ball speed, etc. Unfortunately the idea did not catch any interest. In retrospect, all ROM-based cartridge manufacturers may have been required to pay a royalty to Sanders Associates had Ralph Baer filed a patent for his "active cartridges".