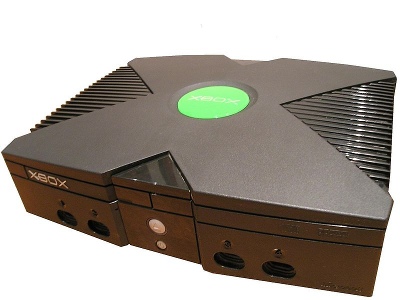 Black model.
Bought from Tradera for 800 SEK with 39 original games and two controllers.

The Xbox is a sixth-generation video game console produced by Microsoft. It was Microsoft's first foray into the gaming console market, and competed with Sony's PlayStation 2, Sega's Dreamcast, and Nintendo's Nintendo GameCube. The integrated Xbox Live service allows players to compete online.

The Xbox was released on November 15, 2001 in North America, February 22, 2002 in Japan, and March 14, 2002 in Australia and Europe. It is the predecessor to Microsoft's Xbox 360 console. It was discontinued in late 2006, although the final Xbox game was released in August 2008. Support for out-of-warranty Xbox consoles was discontinued on March 2, 2009, although in-warranty repairs will still be done.

The Xbox was Microsoft's first product that ventured into the video game console market, after having collaborated with Sega in porting Windows CE to the Dreamcast console. The Xbox first edition was initially developed by a small Microsoft team, that included game developer Seamus Blackley. Microsoft repeatedly delayed the console, which was revealed at the end of 1999 following interviews of then-Microsoft CEO Bill Gates. Gates stated that a gaming/multimedia device was essential for multimedia convergence in the new times, confirmed by Microsoft with a press release. A certain amount of excitement surrounded the announcement of Xbox. When Bill Gates unveiled it at the Game Developers Conference in 2000, audiences were dazzled by the console's amazing technology. At the time that Gates made the announcement, Sega's Dreamcast was diminishing and Sony's PlayStation 2 was just hitting the streets in Japan.