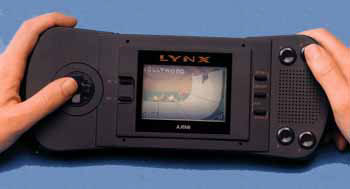 Bought from a Tradera auction.

My games for Atari Lynx

About 75 games were released to this console. The pretty thin and cardlike cartridges are inserted through a slit at the left side of the machine, hidden under a plastic cover. The machine consumed too much energy to be useful on batteries. It could drain a fresh set of batteries in just 4 hours! The machine could also be turn around to be useful for left handed people, which is the reason why some buttons are duplicated. Some games were also played in portrait mode.

To address some of the problems Atari later released a smaller Lynx II.