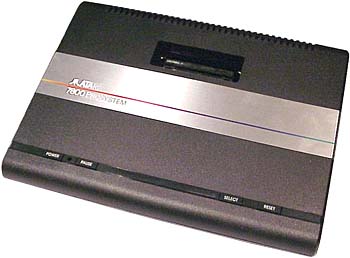 Bought from a Tradera auction.

My games for Atari 7800 ProSystem

This is the follow-up of the badly selling 5200 SuperSystem. About 65 games were produced to the console. It could also play most Atari 2600 games.

The Atari 7800 ProSystem, or simply the Atari 7800, is a video game console released by Atari Corporation in June 1986. A test market release had occurred two years earlier under Atari Inc. The 7800 was designed to replace Atari Inc.'s unsuccessful Atari 5200 and later to re-establish Atari Corp.'s market supremacy against Nintendo and Sega. With this system, Atari Inc. addressed all the shortcomings of the Atari 5200: it had simple digital joysticks; it was almost fully backward-compatible with the Atari 2600; and it was affordable (originally priced at US$140).