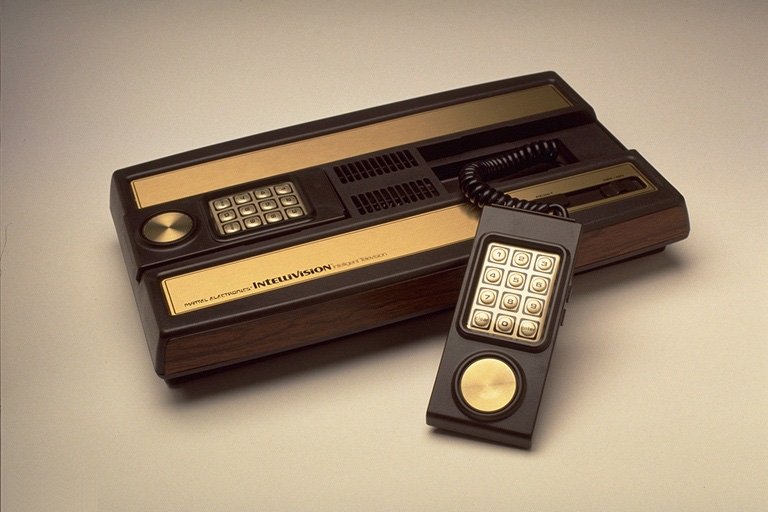 My games for Mattel Intellivision

The Intellivision was developed by Mattel Electronics, a subsidiary of Mattel formed expressly for the development of electronic games. The console was test marketed in Fresno, California, in 1979 with a total of four games available, and was released nationwide in 1980 with a price tag of US$299 and a pack-in game: Las Vegas Poker & Blackjack. Though not the first system to challenge Atari (systems from Fairchild Semiconductor, Bally, and Magnavox were already on the market), it was the first to pose a serious threat to Atari's dominance. A series of ads featuring George Plimpton were produced that mercilessly attacked the Atari 2600's lesser capabilities with side-by-side game comparisons.

One of the slogans of the television advertisements stated that Intellivision was "the closest thing to the real thing"; one example in an advertisement compared golf games. The other console's games had a blip sound and cruder graphics, while the Intellivision featured a realistic swing sound and striking of the ball, and graphics that suggested a more 3D look, although undoubtedly crude when compared with modern gaming consoles. There was also an advertisement comparing the Atari 2600 to it, featuring the slogan "I didn't know".

Like Atari, Mattel marketed their console to a number of retailers as a rebadged unit. These models include the Radio Shack Tandyvision, the GTE-Sylvania Intellivision, and the Sears Super Video Arcade. (The Sears model was a particular coup for Mattel, as Sears was already selling a rebadged Atari 2600 unit, and in doing so made a huge contribution to Atari's success.)

In its first year Mattel sold 175,000 Intellivision consoles, and the library grew to 19 games. At this point in time, all Intellivision games were developed by an outside firm, APh. The company recognized that what had been seen as a secondary product line might be a big business. Realizing that potential profits are much greater with first party software, Mattel formed its own in-house software development group.

The original five members of that Intellivision team were manager Gabriel Baum, Don Daglow, Rick Levine, Mike Minkoff and John Sohl. Levine and Minkoff (a long-time Mattel Toys veteran) both came over from the hand-held Mattel games engineering team. To keep these programmers from being hired away by rival Atari, their identity and work location was kept a closely guarded secret. In public, the programmers were referred to collectively as the Blue Sky Rangers.

By 1982 sales were soaring. Over two million Intellivision consoles had been sold by the end of the year, earning Mattel a $100,000,000 profit. This was a big year for Mattel. Third party Atari developers Activision, and Imagic began releasing games for the Intellivision, as did hardware rivals Atari and ColecoVision. Mattel created M Network branded games for Atari and Coleco's systems. The most popular titles sold over a million units each. The Intellivision was also introduced in Japan that year by Bandai.

The original 5-person Mattel game development team had grown to 110 people under now-Vice President Baum, while Daglow led Intellivision development and top engineer Minkoff directed all work on all other platforms.