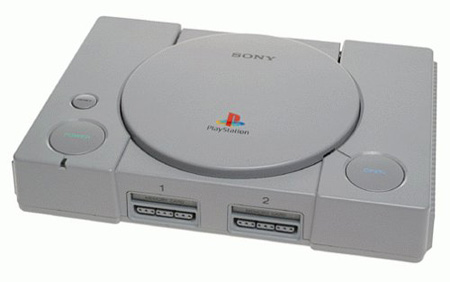 With mod chip.
Bought from local game store in 1997.

After Sony and Nintendo's collaboration on the Super CD-ROM came to an end, Sony continued their research and decided to make a stand alone console. A deal was reached with Nintendo to allow the Play Station (as it was called then) to play SNES cartridges. This feature was dropped from the final design, and the name changed to PlayStation.

A powerful machine, the PlayStation featured 3D graphics capabilities which at the time were remarkable. Games like Tomb Raider made 3D game worlds popular and effectively put an end to the 2D shoot 'em ups and platformers which had been around since the late '70s and early '80s.

A redesigned machine named PSone was released in 2000. This smaller version lacked the serial port but was otherwise fully compatible with older games. The PS and PSone achieved combined sales of more than 102 million units between them, making the PlayStation the first ever console to break the 100 million mark. In the process PlayStation became a household name, ended Nintendo's domination of the market and fought off competition from Sega's Saturn and Dreamcast, which no doubt had an influence on Sega's decision to pull out of the console hardware business.