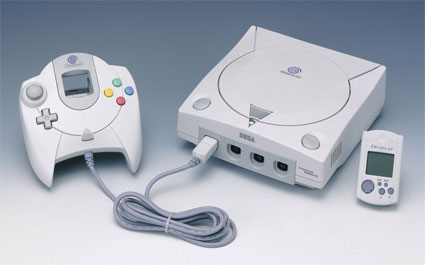 The Dreamcast, as it would come to be known, was the result of two competing development projects. Two teams, one from Japan and one from America, were tasked with creating a new console, mainly to get a head start in the next gen battle after the Saturn's lack of success.

The machines were quite similar with both teams settling on the Hitachi SH-4 for the CPU, the main difference being the choice of manufacturer for the graphics chip. The Japanese team went for a chip based on VideoLogic's PowerVR technology. This machine was codenamed White Belt, Guppy, and Katana. 3dfx was the company of choice for the American team. Using technology based on the Voodoo 2 chip these prototypes were codenamed Black Belt, Shark and Dural. This project came to an end when 3dfx revealed details of their deal with Sega, which lead to the Japanese team being given the go ahead to develop what would become the Dreamcast.

When the Dreamcast launched in 1998 it was by far the most powerful console available, as was demonstrated by Soul Calibur which featured stunning animation and could easily have been mistaken for a tech demo. Early sales were very strong, with the console breaking records for pre-orders and first day sales. However, Sony's announcement of the PlayStation 2 in April 1999, almost a year before it launched, had a dramatic impact on sales. PlayStation had become a household name while Sega's image had been severely damaged by previous hardware such as the 32X and Mega CD. Sales slowed as both consumers and developers waited for the launch of the PS2.

In January 2001 Sega announced that Dreamcast production would cease by March that year. This would be the end of Sega's presence in the home console business, although the company would continue as a software publisher and an arcade machine developer.

Software was still developed by a number of companies including Sega who released their final Dreamcast game, Puyo Pop Fever, in February 2004. Independent games continued to be developed, the most recent being released in March 2007.