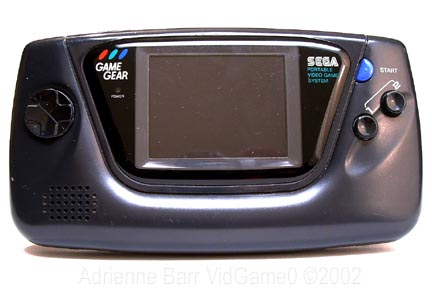 My games for Sega Game Gear

In 1991 Sega entered the handheld marked with its Game Gear console to compete with Nintendo's popular Game Boy. The hardware was pretty much a direct copy of Sega's 8-bit Master System technology which was just dramatically reduced in size to fit the handheld case. There was also an adapter called Master Gear which enabled you to play SMS games on your GG. The only real difference between the Master System and the Game Gear is that the GG has a color palette of 4096 compared to the 256 of the SMS. This is pretty much the only reason why the SMS can't play GG games.

Compared to Nintendo's Game Boy, Game Gear has many advanced features like a quite big backlit color screen (3.2''), which even the original Game Boy Advance doesn't have, and a more ergonomical case design.

But this was not enough to win the handheld battle. Nintendo's console already had many good games available whereas GG had mostly conversions of old SMS games with added colors. It was also more expensive that the Game Boy due to its color screen. The battery life of the GG was also quite short with the batteries of the time (not so much of problem nowadays as batteries have improved) and it also took six AA sized batteries at once which was quite a strain on the owners wallet. The machine was also more fragile that the Game Boy and many of the machines that you can see for sale today have scratches on their screen and sound problems especially when using headphones.