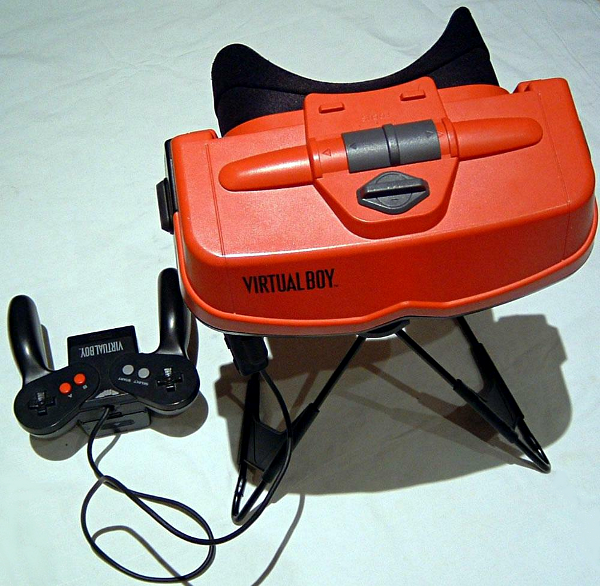 Bought from USA through eBay.

The Virtual Boy was the first portable game console capable of displaying "true 3D graphics." Most video games are forced to use perspective to achieve the illusion of three dimensions on a two-dimensional screen, but the Virtual Boy was able to create a more accurate illusion of depth through an effect known as parallax. In a manner similar to using a head-mounted display, the user places his face inside a pair of rubber goggles on the front of the machine, and then an eyeglass-style projector allows viewing of the monochromatic (in this case black and red) image. It was released on July 21, 1995 in Japan and August 14, 1995 in North America and at a price of around US$180. It met with a lukewarm reception that was unaffected by continued price drops. Nintendo eventually discontinued it the following year.

The system does not have a full 384 x 224 array of LEDs as a display. It uses a pair of 1 x 224 linear arrays (one per eye) and rapidly scans the array across the eye's field of view using flat oscilating mirrors. These mirrors vibrate back and forth at very high speed (they are what produce the mechanical humming noise from inside the unit) and can be damaged if the Virtual Boy is hit, knocked over, or used while in rough motion (such as in a car). A full-size display, while mechanically simpler, would have increased the Virtual Boy's physical size and unit cost to the point where the system would become uneconomical. Every Virtual Boy game has the option to pause automatically every 15-30 minutes to remind the player to take a break, to prevent undue eye strain and possible headaches.