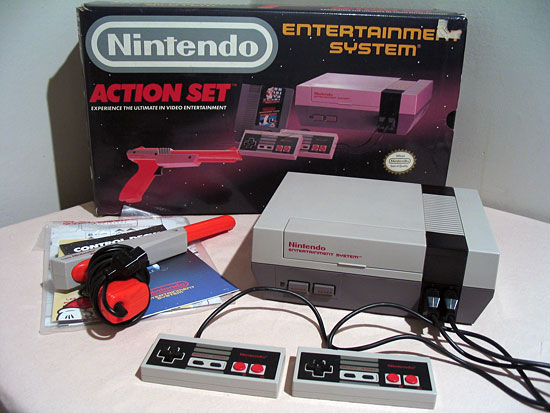 Donation from Moment and Snout.

Bought from trade market in Norrköping for 150 SEK.

Bought from a fleamarket in Växjö.

Donation from Moment and Snout.

The Nintendo Entertainment System (often referred to as NES or simply just Nintendo), is an 8-bit video game console released by Nintendo in North America, Brazil, Europe, and Australia in 1985. Its Japanese equivalent is known as the Family Computer or simply, the Famicom.

The most successful gaming console of its time in Asia and North America (Nintendo claims to have sold over 60 million NES units worldwide), it helped revitalize the video game industry following the video game crash of 1983. It set the standard for subsequent consoles in everything from game design (the breakthrough platform game, Super Mario Bros., was the system’s first major success) to controller layout. The NES was the first console for which the manufacturer openly courted third-party developers.

Following a series of arcade game successes in the early 1980s, Nintendo made plans to produce a cartridge-based console. Masayuki Uemura designed the system, which was released in Japan on July 15, 1983 for ¥14,800 alongside three ports of Nintendo’s successful arcade games Donkey Kong, Donkey Kong Jr., and Popeye. The Nintendo Family Computer (Famicom) was slow to gather momentum: during its first year, many criticized the system as unreliable, prone to programming errors and rampant freezing. Following a product recall and a reissue with a new motherboard, the Famicom’s popularity soared, becoming the best-selling game console in Japan by the end of 1984. The recalled version featured square buttons, while all Famicom systems produced after the recall feature circular buttons. These recalled systems fetch high prices on auction sites such as eBay and Yahoo! auctions Japan.

In Europe and Australia, the system was released to two separate marketing regions (A and B). Distribution in region B, consisting of most of mainland Europe (excluding Italy), was handled by a number of different companies, with Nintendo responsible for most cartridge releases; most of region B saw a 1986 release. Mattel handled distribution for region A, consisting of the United Kingdom, Ireland, Italy, Australia and New Zealand, starting the following year. Not until 1990 did Nintendo’s newly created European branch take over distribution throughout Europe. Despite the system’s lackluster performance outside of Japan and North America, by 1990 the NES had become the best-selling console in video game history.

As the 1990s dawned, however, renewed competition from technologically superior systems such as the 16-bit Sega Mega Drive (known as the Sega Genesis in North America) marked the end of the NES’s dominance. Eclipsed by Nintendo’s own Super Nintendo Entertainment System (SNES), the NES’s user base gradually waned. Nintendo continued to support the system in America through the first half of the decade, even releasing a new version of the console, the NES 2, to address many of the design flaws in the original NES hardware. By 1995, though, in the wake of ever decreasing sales and the lack of new software titles, Nintendo of America officially discontinued the NES. Despite this, Nintendo of Japan kept producing new Nintendo Famicoms for a niche market up until October 2003, when Nintendo of Japan officially discontinued the line. Even as developers ceased production for the NES, a number of high-profile video game franchises and series for the NES were transitioned to newer consoles and remain popular to this day. Nintendo’s own Super Mario Bros., The Legend of Zelda, and Metroid franchises debuted on the NES, as did Capcom’s Mega Man franchise, Konami’s Castlevania franchise, and Square Enix’s Final Fantasy and Dragon Quest franchises.