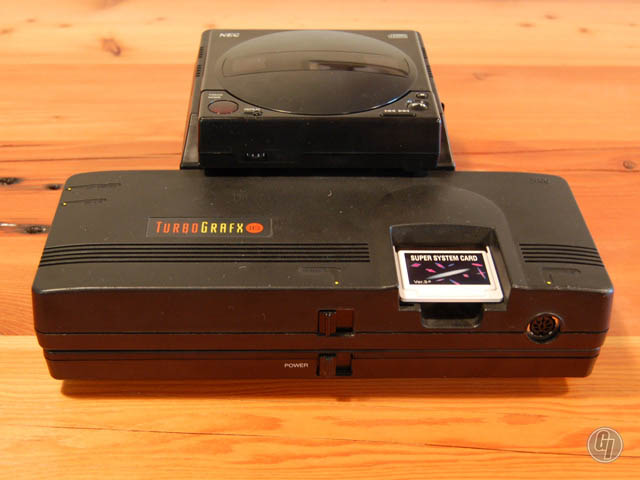 The TurboGrafx-16, known as PC-Engine in Japan and Europe, is a video game console first released in Japan by NEC on October 30, 1987. The system was released in late August 1989 in North America. A PAL version of the system also saw a very limited release in the UK and continental Europe in 1990 as Turbografx (not including the "16" in the title, and uncapitalized "g" in "grafx").

The TurboGrafx-16 was an 8-bit system, with 16-bit graphics chip capable of displaying 482 colors at once, and additionally FM synthesis for audio.

The PC-Engine was a collaborative effort between Japanese software maker Hudson Soft (which maintains a chip-making division) and NEC. Hudson was looking for financial backing for a game console they had designed, and NEC was looking to get into the lucrative game market. The PC Engine was and is a very small video game console, due primarily to a very efficient three-chip architecture and its use of HuCards, credit-card sized data cartridges. "HuCard" (Hudson Card; also referred to as "TurboChip" in North America) was derived from Hudson Soft. The cards were the size of a credit card (but slightly thicker) and thus were somewhat similar to the card format used by the Sega Master System for budget games. Unlike the Sega Master System (which also supported cartridges), however, the TurboGrafx-16 used HuCards exclusively. TG-16 featured an enhanced MOS Technology 65C02 processor and a custom 16-bit graphics processor, as well as a custom video encoder chip, all designed by Hudson. The HES logo found on the manual of every Japanese game stood for "Hudson Entertainment System".

It was the first console to have an optional CD module, allowing the standard benefits of the CD medium: more storage, cheaper media costs, and redbook audio. The efficient design, backing of many of Japan's major software producers, and the additional CD ROM capabilities gave the PC Engine a very wide variety of software, with several hundred games for both the HuCard and CD formats.

The PC Engine was extremely popular in Japan, beating Nintendo's Famicom in sales soon after its release, with no fewer than twelve console models released from 1987 to 1993. It was capable of up to 482 colors at once in several resolutions, and featured very robust sprite handling abilities. The Hudson-designed chroma encoder delivered a video signal more vibrant and colorful than both the Famicom and the Sega Mega Drive and is largely regarded as the equal to Nintendo's Super Famicom, although that system was not released until 1990.

Despite the system's success, it started to lose ground to the Super Famicom. NEC made one final effort to resuscitate the system with the release of the Arcade Card expansion, bringing the total amount of RAM up to a then-massive 2048K; many Arcade Card games were conversions of popular NeoGeo titles. The additional memory even allowed the system to display 3D polygon graphics well beyond what the competing Super Famicom and Megadrive/Mega-CD could offer. By this time, however, it was too late -- only a relative handful of Arcade Card games were ever produced, and the expansion was never released in the U.S.