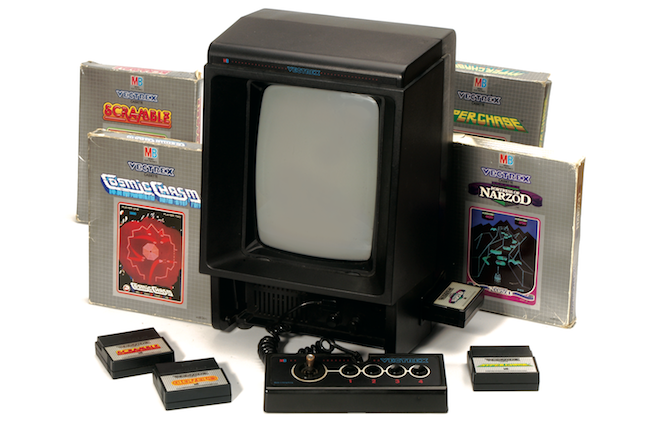 In pretty bad condition. The previous owner seems to have put a lamp on top of the console and the heat has melted some of the top plastic.
The item that started my collection! I used to rent a vectrex from a local video store as a kid. Many years later I found an ad for this console and bought it. The rush of nostalgia from playing this game again made me look for more and the rest is history.

Bought this one from a Tradera auction due to the bad shape of my first Vectrex. This one is in almost mint condition.

My games for Milton Bradley Vectrex

The Vectrex is an 8-bit video game console developed by General Consumer Electric (GCE) and later bought by Milton Bradley Company. The Vectrex is unique in that it utilized vector graphics drawn on a monitor that was integrated in the console. It was released in November 1982 at a retail price of $199. As the video game market declined and then crashed, the Vectrex exited the market in early 1984.

Smith Engineering briefly considered designing a handheld version of the device in 1988, though the success of the Nintendo Game Boy made such a project too risky. In the mid-1990s, Smith Engineering condoned the duplication of the Vectrex system image and cartridges for non-commercial uses and has expressed joy to see that it has still-thriving developer and user communities.

Unlike other video game consoles which connected to TVs to display raster graphics, the Vectrex included its own monitor which displayed vector graphics. The monochrome Vectrex used screen overlays to give the illusion of color, and also to reduce the severity of the inherent flickering caused by the vector monitor. At the time many of the most popular arcade games used vector displays, and GCE was looking to set themselves apart from the pack by selling high-quality versions of games like Space Wars and Armor Attack. The system even contained a built in game, the Asteroids-like Minestorm.