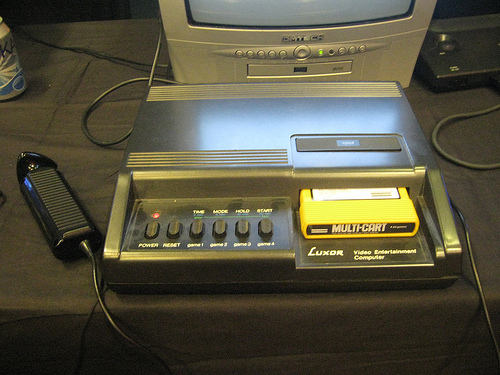 This is a swedish licensed clone of the Fairchild Channel F console. The Channel F was cloned in many countries and in Sweden the company Luxor constructed two models of the console, with different exterior design.

The Fairchild Channel F is a game console released by Fairchild Semiconductor in August 1976 at the retail price of $169.95. It has the distinction being the first programmable ROM cartridge-based video game consoles. Initially titled Video Entertainment System, or VES, when Atari released their VCS the next year, Fairchild renamed it.

The Channel F is based on the Fairchild F8 CPU, invented by Robert Noyce before he left Fairchild to start his own company, Intel. The F8 is very complex compared to the typical integrated circuits of the day, and had more inputs and outputs than other contemporary chips. Because chip packaging was not available with enough pins, the F8 is instead fabricated as a pair of chips that had to be used together to form a complete CPU. The graphics are quite basic, although it is in color which was a large step forward from the contemporary Pong machines. Sound is played through an internal speaker, rather than the TV set.

The controllers are a joystick without a base; the main body is a large hand grip with a triangular "cap" on top, the top being the portion that actually moved. It can be used as both a joystick and paddle (twist), and not only pushed down to operate as a fire button but also pulled up. The unit contains a small compartment for storing the controllers when moving it: this is useful because the wiring is notoriously flimsy and even normal movement could break it.

26 cartridges released, with between 2 and 4 games on each.