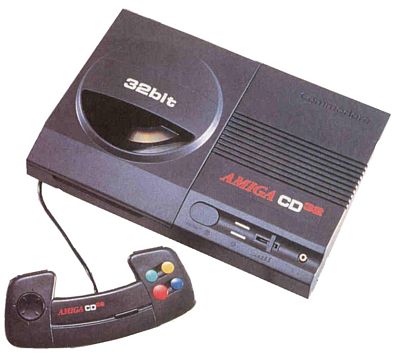 Bought from a Gomér & Andersson auction.

The Amiga CD32, styled "CD32" (code-named 'Spellbound'), was the first 32-bit CD-ROM based video game console released in western Europe, Australia and Canada. It was first announced at the Science Museum in London, United Kingdom on 16 July 1993, and was released in September of the same year. The CD32 is based on Commodore's Advanced Graphics Architecture chipset, and is of similar specification to the Amiga 1200 computer. Using 3rd-party devices, it is possible to upgrade the CD32 with keyboard, floppy drive, hard drive and mouse, turning it into a personal computer. A hardware MPEG decompression module for playing Video CD was also available. The CD32 managed to secure over 50% of the CD-ROM market in the UK in 1993 and 1994, outselling the Sega Mega-CD, the Philips CDi, and even PC CD-ROM sales.

The CD32 was released in Canada and was planned for release in the United States. However, a deadline was reached for Commodore to pay a patent royalty to Cad Track for their use of their XOR patent. A federal judge ordered an injunction against Commodore preventing them from importing anything into the United States. Commodore had built up CD32 inventory in their Philippine manufacturing facility for the United States launch, but, being unable to sell the consoles, they remained in the Philippines until the debts owed to the owners of the facility were settled. Commodore declared bankruptcy shortly afterwards, and the CD32 was never officially sold in the United States. However, imported models did come over the border from Canada, and many stores in the United States (primarily mail-order stores) imported units for domestic sale. During the long bankruptcy proceedings, Commodore UK also provided some hardware components and software for the American market, including production of the MPEG Video Module that was not officially released by Commodore International.

On its release, the CD32 was marketed by Commodore as 'the world's first 32-bit CD games console'. Although it was indeed the first such machine released in Europe and North America, the FM Towns Marty, a console released exclusively in Japan, beat it to market by seven months. Some people still argue that the CD32 was the first true 32-bit CD game console, since its 68EC020 processor has a 32-bit data bus both internally and externally, while the 386SX in the FM Towns Marty has a 16-bit data bus externally.

Ultimately, Commodore was not able to meet demand for new units because of component supply problems. Sales of the CD32 in Europe were not enough to save Commodore, and the bankruptcy of Commodore International in April 1994 caused the CD32 to be discontinued only months after its debut. During its short life the Amiga CD32 shifted approximately 100,000 units.