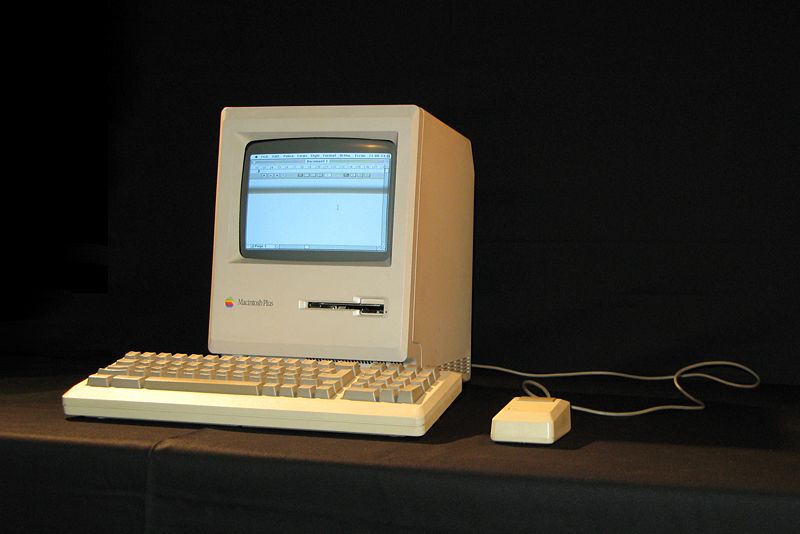 The Macintosh Plus computer was the third model in the Macintosh line, introduced two years after the original Macintosh and a little more than a year after the Macintosh 512K. As an evolutionary improvement over the 512K, it introduced RAM expansion from 1 MiB to 4 MiB, and the SCSI peripheral bus, among smaller improvements. It originally had the same generally beige-colored case as the original Macintosh ("Pantone 453"), but in 1987, the case color was changed to the long-lived, warm gray "Platinum" color.

The Mac Plus was the first Macintosh model to include a SCSI port, which launched the popularity of external SCSI devices for Macs, including hard disks, tape drives, CD-ROM drives, printers, and even monitors. Its SCSI implementation was engineered shortly before the initial SCSI spec was finalized and, as such, is not 100% SCSI-compliant. As the Mac Plus had no provision at all for expansion other than the SCSI bus, the entire onus of expansion was on the user. This usually made it very expensive. SCSI ports remained standard equipment for all Macs until the introduction of the iMac in 1998.

The Macintosh Plus was the last classic Mac to have a phone cord-like port in front for the keyboard, as well as the DE-9 connector for the mouse; later models would use ADB ports.

It had a new 3.5-inch double-sided 800 KB floppy drive, offering double the capacity of previous Macs along with backward compatibility. The new drive was controlled by the same IWM chip as in previous models, implementing variable speed GCR. The drive was still completely incompatible with PC drives. The 800 KB drive had two read/write heads, enabling it to simultaneously use both sides of the floppy disk and thereby double storage capacity.

The Mac Plus was the first of many Macintoshes to use SIMMs (single in-line memory modules) for its memory. It came standard with 1 MB of RAM (four 256 KB SIMMs) and could be upgraded to 4 MB of RAM. It had 128 KB of ROM on the motherboard, which was double the amount of ROM that was in previous Macs; the new System software and ROMs included routines to support SCSI, the new 800 KB floppy drive, and the Hierarchical File System (HFS), which used a true directory structure on disks (as opposed to the earlier MFS, Macintosh File System in which all files were stored in a single directory, with one level of pseudo-folders overlaid on them). For programmers, the fourth Inside Macintosh volume detailed how to use HFS and the rest of the Mac Plus's new system software. This new filing system allowed it use the first hard drive Apple developed for the Macintosh 512K, the IWM floppy disk-based Hard Disk 20 and the new ROMs allowed the Macintosh to use the drive as a startup disk for the first time. The Plus still did not include provision for an internal hard drive and it would be over 9 months before Apple would offer a SCSI drive replacement for the slow Hard Disk 20. It would be well over a year before Apple would offer the first internal hard disk drive in any Macintosh.

A compact Mac, the Plus had a 9-inch 512 by 342 pixel monochrome display with a resolution of 72 PPI, identical to that of previous Macintosh models. Unlike earlier Macs, the Mac Plus's keyboard included a numeric keypad and directional arrow keys, and, as with previous Macs, it had a one-button mouse and no fan, making it extremely quiet in operation.

There was also an upgrade kit for the earlier Macintosh 128K and Macintosh 512K/enhanced, which included a new motherboard, floppy disk drive and rear case. The owner retained the front case, monitor, and analog board. Because of this, there is no "Macintosh Plus" on the front, and the Apple logo is recessed and in the bottom left hand corner. However, the label on the back of the case reads "Macintosh Plus 1MB". The new extended Plus keyboard could also be purchased. Unfortunately, this upgrade cost almost as much as a new machine.

The Mac Plus itself could be upgrade further with the use of third party accelerators, which clipped onto the 68000 processor, allowing the Plus to run up to a 32MHz 68030 processor and adding up to 16MB RAM.