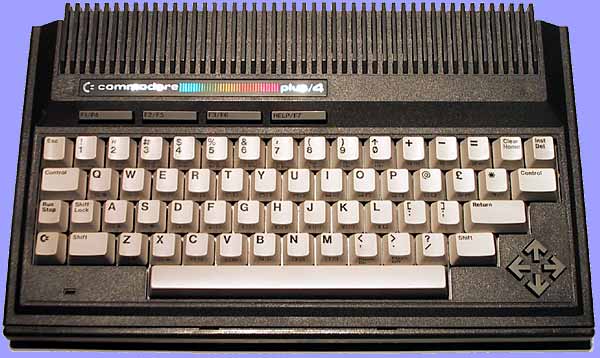 The Commodore Plus/4 was a home computer released by Commodore International in 1984. The "Plus/4" name refers to the four-application ROM resident office suite (word processor, spreadsheet, database, and graphing); it was billed as "the productivity computer with software built-in". It had some success in Europe. A total flop in the United States, it was derided as the "Minus/60"—a pun on the difference between the Plus/4 and the dominant Commodore 64.

In the early 1980s, Commodore found itself engaged in a price war in the home computer market. The VIC-20 resulted from MOS Technology designing a video chip it couldn't sell, and companies like Texas Instruments and Timex Corporation undercutting the price of Commodore's PET line. The Commodore 64, the first 64-KB computer to sell for under US$600, was another salvo in the price war but it was far more expensive to make than the VIC-20 because it used discrete chips for video, sound, and I/O. Commodore president Jack Tramiel wanted a new computer line that would use fewer chips and at the same time address some of the user complaints about the VIC and C64.

Commodore's third salvo — which, as it turned out, was fired just as most of Commodore's competition was leaving the home computer market — was the C116, C16, and Plus/4. There were also prototypes of a 232, basically a 32k version of the Plus /4 without the software ROMs, and a V364 which had a numeric keypad and built in voice synthesis. The latter two models never made it to production. All these computers used a 6502 compatible MOS 7501 that was clocked approximately 75% faster than the 6502 and 6510 used in the VIC-20 and C64 respectively, and a MOS Technology TED all-in-one video, sound, and I/O chip. The Plus/4's design is thus philosophically closer to that of the VIC-20 than of the C64.

The Plus/4 was the flagship computer of the line. The Plus/4 had 64 KB of memory while the C16 and 116 had 16 KB. The Plus/4 had built-in software, whereas the others did not. The Plus/4 and C16 had full-travel keyboards; the 116 used a rubber chiclet keyboard like less-expensive Timex-Sinclair computers and the original IBM PCjr. The C116 was only sold in Europe. All of the machines were distinguished by their dark gray cases and light gray keys. This was a reversal of the color scheme on the 64 and VIC, which used lighter cases and darker-colored keys.

The Plus/4 was introduced in June 1984 and priced at US$299. It was discontinued in 1985. It is not completely clear whether Commodore's intent was to eventually totally replace the C64 with the Plus/4, or whether they wanted to attempt to expand the home computer market and sell the Plus/4 to users who were more interested in serious applications than gaming. However, the Plus/4 succeeded at neither and quickly disappeared.