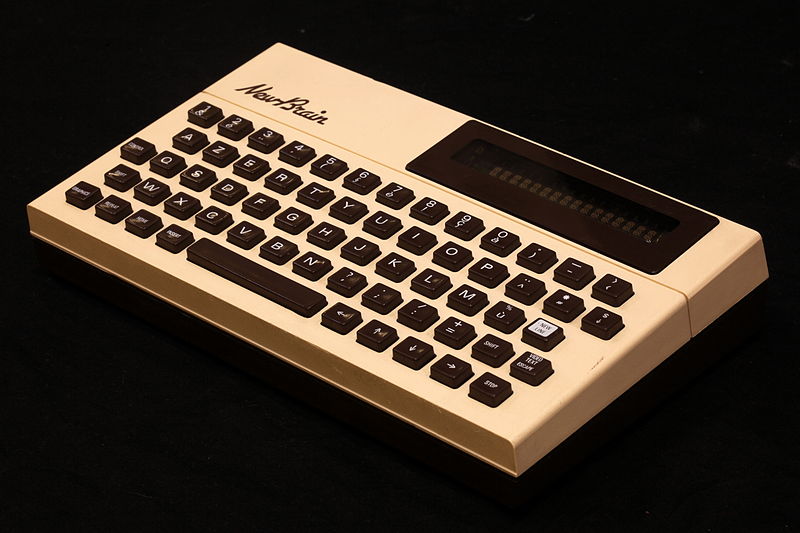 Model with beautiful built-in vacuum display.
This is a bit embarrasing. My collection obviously is too large. I have bought this some time between 1996 and 2001 without remembering it. I found it when packing and cleaning before moving to a new appartment. :)

The Grundy NewBrain was a microcomputer sold in the early 1980s by Grundy Business Systems Ltd of Teddington and Cambridge, England.

The NewBrain project was started in 1978 when Sinclair Radionics began design work with Mike Wakefield as the designer and Basil Smith as the software engineer. This project was intended to provide competition for Apple and hardly fitted in with Sinclair's focus on inexpensive consumer-oriented products. When it became obvious to Sinclair that the NewBrain could not be made for the sub-£100 price he envisaged his thoughts turned to the ZX80 that was to be developed by his other company, Science of Cambridge Ltd.

The NewBrain project was moved to Newbury Laboratories by the National Enterprise Board (NEB), the owner of both Sinclair Radionics and Newbury Labs, following the closure of Sinclair Radionics. In 1980 Newbury announced the imminent release of three NewBrain models, including a battery-powered portable computer.

Two main models were released. The model 'A' had display to either a TV or a monitor. The model 'AD' also included a one-line, 16-character, vacuum fluorescent (VF) display on the unit which permitted operation with or without a TV screen or monitor - the VF display responded to the cursor keys and scrolled around the screen display area. One additional model was released, but this was a custom version for a pharmaceutical chain, with no screen display - only the VF display - and was never generally discussed.

An expansion chassis was released, providing additional paged memory of 64Kb. The Z80 can only address 64Kb of memory at a time. The paged memory system added the NewBrain to take advantage of several 64Kb modules. The expansion module included a parallel printer port and two hardware based serial ports and an expansion through bus for further modules such as the 8 and 16 way serial modules under development. The expansion module included Series 2 software, replacing those in the processor module as well as software for the new devices.

CP/M 2.2 was also available. Under CP/M 2.2 the internal BASIC ROM was paged out for the CP/M ROM but this gave only 32Kb memory to CP/M. With the expansion module fitted the three 8Kb ROMS of the processor module were paged out to give the NewBrain one of the highest available TPA (Transient Program Area - memory left after the OS demands are satisfied) to CP/M. Grundy Business Systems released two 5.25" drive formats, 40 track 200Kb single sided and 80 track 800Kb double sided. Several independent dealers provided 40 track 400Kb double sided drive. In 1983 the Sony 3.5" was becoming available and single and paired units were being supplied to dealers in the NewBrain cream cases. The 3.5" 800Kb discs also got a more effective format allowing the files from 4x200Kb floppies to be stored on one 800Kb disc.

Over 50,000 NewBrain units were sold to educational, scientific, industry, small business and banking sectors; as well as to home users. Scientific use was strong because of the unusually high precision of the NewBrain's floating point computations and its very high-resolution graphics. Business use was also proportionally high due to the availability of CP/M based software. The main industrial use was within the pharmaceutical industry.