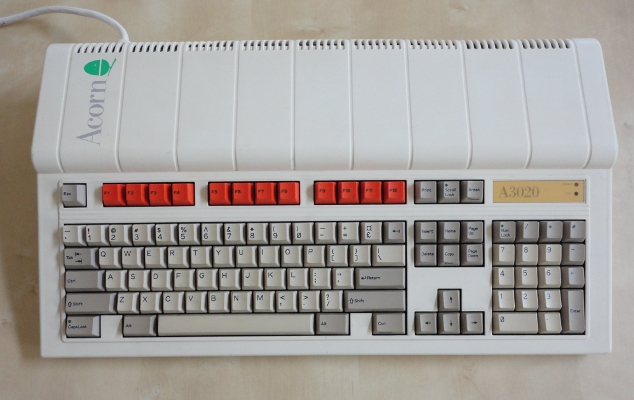 With harddisk.
Bought from eBay early 2011.

The Acorn Archimedes was Acorn Computers Ltd's general purpose home computer to be based on their own ARM architecture. The Archimedes computers were the first ones using the ARM processors which now are used all over the mobile industry.

The Acorn Archimedes A3000 was replaced by the Acorn A3010 and A3020, two simililar but slightly different models, aimed at the home and educational markets.

The A3020 was a lower-cost replacement for A3000 aimed at British classrooms. The case was slightly shorter at the back and an awkward to reach mouse port that was underneath the A3000 was moved to the back.

The RISC OS 3 operating system and more curved Logitech-built 3 button mouse used on the A4000/A5000/A4 were included as standard, as well as a 1.6MB floppy drive capable of reading all PC disks as well as the new extended Acorn 1.6MB format.

Upgrading memory to 4MB of RAM was simple with plug-in ZIP D-RAM chips.

Looking inside the machine however, Acorn have rather stupidly built-in the 220/240 volt power supply to the motherboard, making conversion to run on 110 volts for US and Japanese users impossible without very serious modification. If the power supply unit fails then repair would also be difficult.

The Acorn A3020 had a hard disk controller to which a standard 2.5" laptop-style hard disk could be added, and a DB-15 network port which the A3010 did not have.