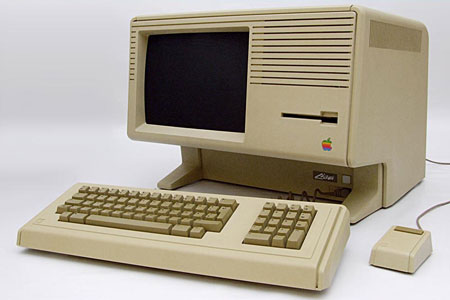 With harddisk, printer, software and manuals. Might need some work to get in shape, but looks promising.
Bought from Tradera august 2009, for about 2200 SEK.

The Apple Lisa was a personal computer designed at Apple Computer, Inc. (now Apple, Inc.) during the early 1980s.

The Lisa project was started at Apple in 1978 and evolved into a project to design a powerful personal computer with a graphical user interface (GUI) that would be targeted toward business customers.

Around 1982, Steve Jobs was forced out of the Lisa project, so he joined the Macintosh project instead. Contrary to popular belief, the Macintosh is not a direct descendant of Lisa, although there are obvious similarities between the systems and the final revision, the Lisa 2/10, was modified and sold as the Macintosh XL.

The Lisa was a more advanced (and far more expensive) system than the Macintosh of that time in many respects, such as its inclusion of protected memory, cooperative multitasking, a generally more sophisticated hard disk based operating system, a built-in screensaver, an advanced calculator with a paper tape and RPN, support for up to 2 megabytes of RAM, expansion slots, a numeric keypad, data corruption protection schemes such as block sparing, non-physical file names (with the ability to have multiple documents with the same name), and a larger higher resolution display. It would be many years before many of those features were implemented on the Macintosh platform. Protected memory, for instance, did not arrive until the Mac OS X operating system was released in 2001. The Macintosh, however, featured a faster 68000 processor (7.89 MHz) and sound. The complexity of the Lisa operating system and its programs taxed the 5 MHz Motorola 68000 microprocessor so that the system felt sluggish, particularly when scrolling in documents.