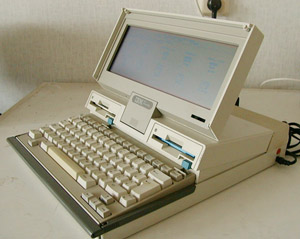 The IBM PC Convertible, released April 3, 1986, was IBM's first laptop computer and was also the first IBM computer to utilize the 3.5" floppy disk which went on to become the standard. Like modern laptops, it featured power management and the ability to run from batteries. It was the follow-up to the IBM Portable and was model number 5140.

The PC Convertible had expansion capabilities through a proprietary ISA bus-based port on the rear of the machine. Extension modules, including a small printer and a video output module, could be snapped into place. The machine could also take an internal modem, but there was no room for an internal hard disk.

Pressing the power button on the computer did not turn it off, but put the machine into a "suspend" mode. This avoided the long process of booting up.

The screen was not very tall, so text characters and graphics were compressed vertically, appearing about half their normal height. The display was capable of resolutions of 80x25 (text), 640x200, and 320x200.

The machine sold very poorly for a number of reasons. The Convertible was heavy, not much faster than the Portable it replaced (despite the newer CMOS processor and use of static RAM), didn't come with traditional PC expansion ports (such as serial ports and a parallel port) without an add-on, and had a hard-to-read, oddly-shaped LCD screen (the first screens lacked a backlight). It also competed against faster portables based on the Intel 80286 that offered optional hard drives from companies such as Compaq, and laptops from companies such as Toshiba and Zenith that were lighter and offered similar specifications, sometimes at half the price. The screen and keyboard were also widely criticized.

It was replaced in 1991 by the IBM PS/2 L40 SX, and in Japan by the IBM Personal System/55note, which was the predecessor to the ThinkPad.