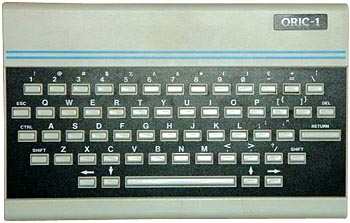 Bought from eBay auction from Brittain. Freight costed more than the machine.

With the success of the Sinclair ZX Spectrum Tangerine's backers suggested a home computer and Tangerine formed Oric Products International Ltd to develop and release the Oric-1 in 1983. Based on a 1 MHz 6502A CPU, it came in 16 KB or 48 KB RAM [2] variants for £129 and £169 respectively, matching the models available for the popular ZX Spectrum and undercutting the price of the 48K Spectrum by a few pounds. Both Oric-1 versions had a 16 KB ROM containing the operating system and a modified BASIC interpreter.

The Oric-1 improved somewhat over the Spectrum with a chiclet keyboard design replacing the Spectrum's renowned "dead flesh" one. In addition the Oric had a true sound chip, the programmable GI 8912, and two graphical modes handled by a semi-custom ASIC (ULA) which also managed the interface between the processor and memory. The two modes were a LORES text only mode (though the character set could be redefined to produce graphics) with 28 rows of 40 characters and a HIRES mode with 200 rows of 240 pixels above three lines of text. Like the Spectrum, the Oric-1 suffered from attribute clash—albeit to a lesser degree in HIRES mode, when a single row of pixels could be coloured differently from the one below in contrast to the Spectrum, which applied foreground and background color in 8 x 8 pixel blocks. As it was meant for the home market, it had a built in television RF modulator as well as RGB output and was meant to work with a basic audio tape recorder to save and load data. Error-checking of recorded programs was bugged, frequently causing user-created programs to fail when loaded back in. A nice feature was an almost standard (except for the connector) Centronics printer interface.

According to the Oric World website (see External links, below), about 160,000 Oric-1s were sold in the UK in 1983 with another 50,000 sold in France (where it was the top-selling machine that year). Although not the 350,000 predicted, it was enough for Oric International to be bought out by Edenspring and given £4m in funding.