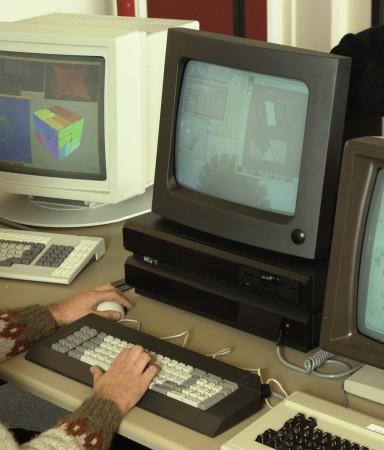 Whitechapel Computer Works Ltd. (WCW) was a computer workstation company formed in the East End of London, United Kingdom in April 1983, with investment from the Greater London Enterprise Board and the Department of Trade and Industry.

Their first workstation model was the MG-1 (named after the Milliard Gargantubrain from The Hitch-Hiker's Guide to the Galaxy). The MG-1 was based on the National Semiconductor NS32016 microprocessor, with a 1024 × 800 pixel monochrome display, a 40 MB Rodime SCSI hard disk and an optional Ethernet interface. Initially, NatSemi's GENIX operating system, a port of 4.1BSD UNIX, was provided; this was later replaced by a port of 4.2BSD called 42nix. The MG-1 also had a partially kernel-based graphical user interface called Oriel.

WCW went into receivership in 1986, but were soon revived, as Whitechapel Workstations Ltd., only to go into liquidation in April 1988. The new company launched the Hitech-10 and Hitech-20 workstations with R2000 and R3000 MIPS architecture processors respectively. These ran the UMIPS variant of UNIX, with either X11 or NeWS-based GUIs, and were aimed at computer animation applications.

Some ex-Whitechapel engineers went on to form Algorithmics Ltd., specialising in MIPS-based embedded systems. Algorithmics was later acquired by MIPS Technologies in 2002. The rights to the Hitech workstations were acquired by Mistral Computer Systems Ltd. in June 1988.