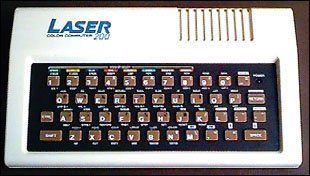 The VTech Laser 200 was an early 8-bit home computer from 1983, also sold as the Salora Fellow (mainly in Scandinavia, particularly Finland), the Texet TX8000 (in the United Kingdom) and the Dick Smith VZ 200 (in Australia and New Zealand).

It was designed and built by Video Technology (VTech) in Hong Kong and derived from the Tandy TRS-80. Based on a Zilog Z80A CPU driven by a television colour burst crystal (3.5795454 MHz), it offered 16 KB of ROM containing Microsoft BASIC, 8 KB RAM and four-colour graphics at a resolution of 128×64 or 64×32, or 32 columns and 16 lines of eight-colour text. The Laser 200 used the MC6847 Video Display Generator (VDG) chip for graphics.

At its UK launch, Texet claimed that the £98 TX8000-branded version was the cheapest colour home microcomputer on the market. However, this was not enough to ensure its success against the dominant ZX Spectrum and similar machines already on sale. Most notably, the Spectrum-like Oric 1 was selling for £99 at this point, and offered a far higher specification than the Texet for little difference in cost.

The "Dick Smith"-badged VZ 200 was more successful in Australia, where it proved popular as a first computer.

The machine ran some basic games on cassette such as Frogger, Scramble, Space Invaders and Moon Patrol.

An improved version known as the VTech Laser 310, or the Dick Smith VZ 300 was released later.