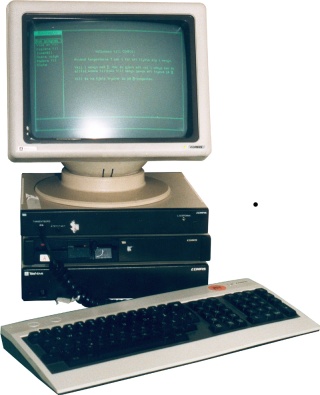 The Telenova Compis computer was designed to be used in swedish schools. It featured a 80186 cpu and used CP/M 86.

The name "compis" would be a synthesis of the word Computer and the swedish word "kompis", meaning Buddy or mate. It was also a shorting for 'computer i skolan' (computer in school). The Compis was called Scandis in Norway.

There was a small speaker in the keyboard. On the later models (Compis II) the network identity and other setup-data of the computer were also stored in the keyboard. Compis II was also capable of running MD-DOS. Some models only had one floppy drive. It had amber monochrome display while the first model had green on black.

Svenska Datorer AB (Swedish Computers AB) went bankrupt shortly after beginning the production of the compis. Further production was taken over by the state-owned Televerket´s company TeleNova that invested large amounts of money in the project.