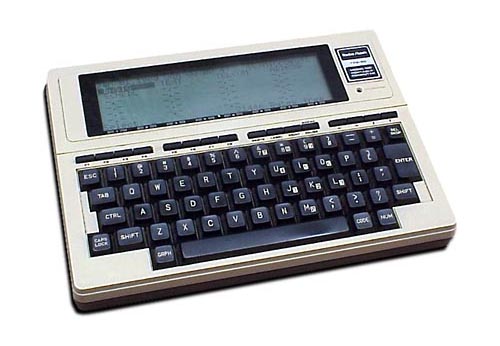 Bought from ad in Linköping.

The TRS-80 Model 100 portable computer was introduced in 1983. It was made by Kyocera, and originally sold in Japan as the Kyotronic 85. Although a slow seller for Kyocera, the rights to the machine were purchased by Tandy Corporation, and the computer was sold through Radio Shack stores in the United States and Canada as well as affiliated dealers in other countries, becoming one of the company's most popular models, with over 6,000,000 units sold worldwide. The Olivetti M-10 and the NEC PC-8201 and PC-8300 were also built on the same Kyocera platform, with some design and hardware differences.

The TRS-80 Model 100 was one of the first-ever notebook computers. It was originally marketed as a Micro Executive Work Station (MEWS), although the term did not catch on and was eventually dropped.