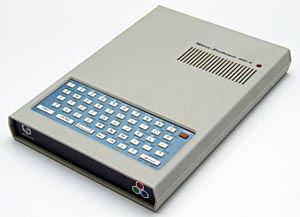 Complete with disk drive interface, disk drive, external keyboard and joystick.
Bought from someone contacting me about the machine.

Microprofessor II (MPF II), introduced in 1982, was Acer's (then known as Multitech) second branded computer product and also one of the earliest Apple clones. It does not look like most other computers. The case of the MPF II was a slab with a small chiclet keyboard on its lower part. In 1983, the Multiprofessor II retailed in the UK for £269.00 including VAT.

One key feature of the MPF II was its Chinese BASIC, a version of Chinese-localized BASIC based on Applesoft BASIC.

The MPF II was not totally compatible with the Apple II. The MPF II did not have Apple II's text mode. All the text was drawn on the screen by software rather than generated by hardware. It was the only cost-effective way to generate Chinese text on screen at a time when a hardware-based Chinese character generator could cost hundreds of U.S. dollars. Like Apple II, MPF II had two graphics buffers. However the second buffer was at address A000H while with Apple II it was at 4000H. MPF-II keyboard interface was very simple and consisted of an 8 bit output port and an input port that were directly connected to keyboard matrix. The Apple joystick interface was not there, and instead the joystick appeared as a keyboard with arrow keys and two other buttons. The external slot interface was also not compatible with the Apple II and could not use many standard interface cards including the Disk II controller.