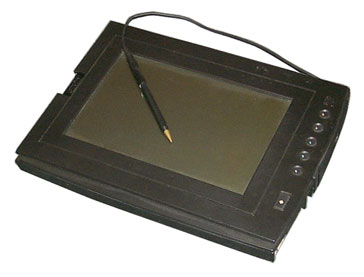 The GRiDPad 1910 is basically an extremely portable PC-XT. It has a 640x400 backlit Monochrome CGA display. It has 2MB of system memory, and often came equipped with a 20 MB 2.5" IDE disk. The pen system is capacitance-based, with a wired stylus. There is a 6-pin micro-DIN XT keyboard interface. Audio is limited to the usual PC Speaker support. There is one serial port expressed on the unit, and expansion for a modem, which came in 2400 and 9600 bps flavors. There are two ATA-FLASH slots on the unit, which are used strictly for storage. There is also an expansion bus connector on the bottom of the system, which includes at least a keyboard connector, a parallel port, and a floppy bus. There are buttons F1 through F5 and a sleep button on the unit, as well as a hard power switch. Power is supplied via Ni-Cad battery packs.

This machine was used primarily for inventory purposes and the like. Apparently it was used within Chrysler for that purpose, and by the United States Army. The military specified more rigidity and durability from the case than the civilian version provided, and so GRiD made the case out of magnesium. They were never sold to the public that way, but occasionally a unit will slide out of the hands of the military.