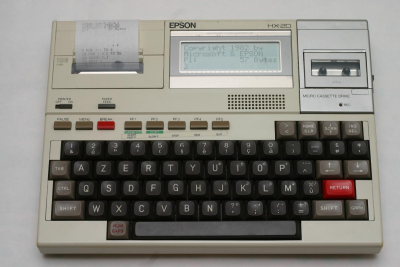 The Epson HX-20 (also known as the HC-20) is generally regarded as the first laptop computer, announced in November 1981, although first sold widely in 1983. Hailed by BusinessWeek magazine as the "fourth revolution in personal computing", it is generally considered both the first notebook and handheld computer and it is for this reason that it is highly prized among collectors.

With about the footprint of an A4 size page, the Epson HX-20 features a full-transit keyboard, rechargeable nickel-cadmium batteries, a built-in 120 × 32-pixel LCD (smaller than that on many mobile phones today), a calculator-size dot-matrix printer, the EPSON BASIC programming language, expandable RAM and a built-in microcassette drive. It uses a proprietary operating system, which consists of the Epson Basic interpreter and a system monitor program, and weighs approximately 1.6 kg. Known colours of the machine are silver and cream, while some prototypes were dark grey. The HX-20 was supplied with a grey carry case. An external acoustic coupler, the CX-20, was available for the HX-20, as was an external floppy disk drive, the TF-20, and an external speech synthesis Augmentative Communication Device (ACD), ‘RealVoice’. The battery life of the HX-20 was approximately 50 hours.

The later, more popular TRS-80 Model 100 line, designed by Kyocera, owed much to the design of the HX-20.