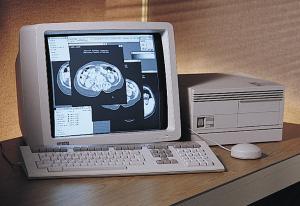 The VAXstation 2000 was introduced in February 1987, it was code named "VAXstar" or "Kapri", and uses the KA410 CPU module containing a 5 MHz MicroVAX II processor with no cache. It was essentially a MicroVAX 2000 in a workstation configuration.