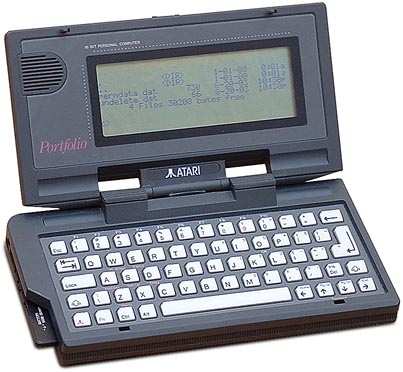 The Atari Portfolio, launched by Atari Corp. in 1989, is the first PC-compatible palmtop computer. The Portfolio was licenced from Distributed Information Processing (DIP) based in Guildford, Surrey, England. The original founding member of DIP was Ian Cullimore, fresh from his experiences at helping design the early Organiser products at Psion.

There is an expansion port on the right side of the computer for parallel, serial, modem or MIDI expansion modules. It uses a card expansion port for removable memory, which is not compatible with PC card as it predates that standard. Expansion cards were available in sizes of 32, 64, and 128 kB initially, and later were available in capacities up to 4 MB. The expansion cards are backed up by a replaceable battery which lasts approximately 2 years. Built-in applications include a text editor, spreadsheet (Lotus 1-2-3 compatible), phone book and time manager. Expansion cards contained programs such as a chess game, a file manager, and a finance manager. Most text-based MS-DOS applications could be run on the Portfolio as long as they did not directly access the hardware and could fit into the small memory.

There was also a card reader available that connected to a desktop PC to read and write to the expansion cards. The kit contained an ISA card, a special cable, the card reader, and software distributed on floppy disk.

The Portfolio still enjoys some popularity today. Many people value them for their strict simplicity and lack of unnecessary features. In addition, several hacks have been made for the Portfolio, including an accessory that allows the use of an electroluminescent backlight on the unit.

Another interesting hack is the Portfolio card-to-CompactFlash converter. It allows the use of regular CF cards in the Portfolio's card slot. The adapter is a simple breadboard that connects to an internal connector. The CF card then can be inserted into the adapter when it is in the unit. In order to use the adapter, some pins on the Portfolio's motherboard must be shorted.