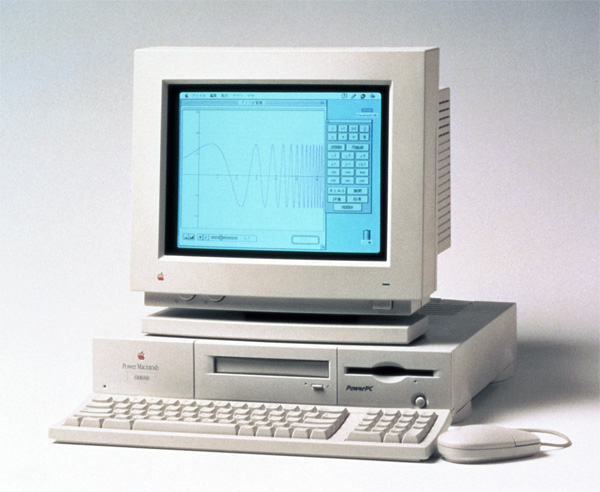 Power Macintosh 6100 was first introduced in 1994, and featured a 60 MHz (later 66 MHz) PowerPC 601 processor. It was later complemented by an AV version, which featured additional audio and visual enhancements such as composite and S-video input/output and full 48 kHz 16-bit DAT-resolution sound processing, invaluable to multimedia professionals. Apple also released a PC-compatible model of the 6100 called the Power Macintosh 6100 DOS Compatible. This version came with a card that featured a Cyrix CX486 DX2/66 80486 processor a single SIMM RAM slot that used the same type of RAM to that in the Power Mac itself, a Creative Technology Vibra 16 sound chipset, and also sported standard PC VGA and joystick ports. One could easily run the Macintosh interface and DOS/Windows 3.1 side by side, even on different monitors if one so desired.

Notable was the new startup and "sad mac" chimes: instead of the electronic "bong" that was the previous norm, it played a guitar chord strummed by jazz guitarist Stanley Jordan, and instead of the "Chimes of Doom" arpeggio that played when there was a hardware error at startup, there was the sound of a car crashing.

This model and the other early NuBus-based Power Macs (7100, 8100 and Workgroup Server 9150) were replaced by the Power Macintosh PCI series released in 1995, although the 6100 DOS compatible continued in production until 1996, even though Apple had already released the anticipated "PC Personality Card" in 1995 that plugged into one of the PCI slots of the newer Power Macs. This card featured a 66 MHz Pentium processor, which was considered very fast at that time.

Generally considered to be the slowest of all the Power Macintoshes in terms of processor speed, the 6100 series was eventually able to be upgraded through third party solutions such as Sonnet Technologies Crescendo G3 NuBus (up to 500 MHz) and G4 NuBus (up to 360 MHz; discontinued) and Newer Technology's MaxPower G3 processor upgrades. However, it was revolutionary enough at the time to replace Jerry Seinfeld's state-of-the-art PowerBook Duo as his ubiquitous desktop Mac.