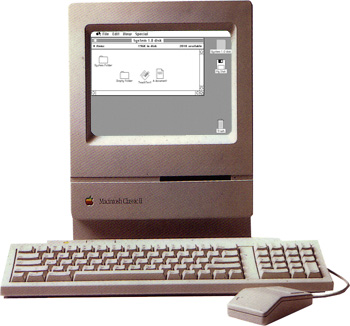 The Macintosh Classic was a personal computer manufactured by Apple Computer. Introduced on October 15, 1990, it was the first Apple Macintosh to sell for less than US$1,000. Production of the Classic was prompted by the success of the Macintosh Plus and the SE. The Classic was very similar to its predecessor, as such that, due to limited technological advances, it used the same 9-inch (23 cm) monochrome CRT display, 512×342 pixel resolution, and its performance was hampered by the same 4 megabyte (MB) memory limit of the older Macintosh computers. Nevertheless, the Classic featured several improvements over the Macintosh Plus, which it replaced as Apple's low-end Mac computer. It was up to 25 percent faster than the Plus and included an Apple SuperDrive 3.5-inch (9 cm) floppy disk drive as standard.

The Classic was an adaptation of Jerry Manock's and Terry Oyama's Macintosh 128K industrial design, as had been the earlier Macintosh SE. Apple released two versions that ranged from $1,000 to $1,500. Reviewers' reactions were mixed; most focused on the slow processor performance and lack of expansion slots. The consensus was that the Classic was only useful for word processing, spreadsheets and databases. The lower price and the availability of education software led to the Classic's popularity in education. It was sold alongside the more powerful Macintosh Classic II in 1991 until its discontinuation the next year.