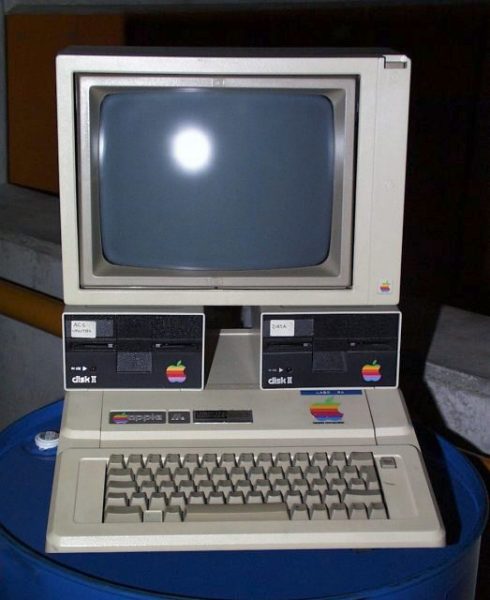 The Apple II Plus was followed in 1983 by the Apple IIe, a cost-reduced yet more powerful machine that used newer chips to reduce the component count and add new features, such as the display of upper and lowercase letters and a standard 64 kB of RAM.

The IIe RAM was configured as if it were a 48 kB Apple II Plus with a language card; the machine had no slot 0, but instead had an auxiliary slot that for most practical purposes took the place of slot 3, the most commonly used slot for 80-column cards in the II Plus.

The auxiliary slot could accept a 1 kB memory card to enable the 80-column display. This card contained only RAM; the hardware and firmware for the 80-column display was built into the Apple IIe, remaining fairly compatible with the older Videx-style cards, even though the low-level details were very different. An "extended 80-column card" with more memory expanded the machine's RAM to 128 kB.

As with the language card, the memory in the 80-column card was bank-switched over the machine's main RAM; this made the memory better suited to data storage than to running software, and in fact the ProDOS operating system, which was introduced with the Apple IIe, would automatically configure this memory as a RAM disk upon booting.

Third-party aux-slot memory cards later allowed expansion up to 1 MB. The 1 K 80-column card also enabled one new graphics mode, Double Lo-Res (80×48 pixels). The extended 80-column card enabled two, Double Lo-Res and Double Hi-Res (560×192 pixels). Both modes doubled the horizontal resolution in comparison to the standard Lo-Res (40×48) and Hi-Res (280×192) Modes; in the case of Double Hi-Res, the number of available colors was increased as well, from 6 to 15. Apple IIe's from the very first production run cannot use Double Hi-Res. Neither of these modes was directly supported by the built-in BASIC, however, so the user had to resort to the use of lots of POKE and CALL commands in BASIC, or assembly language programming, or one of a number of software Toolkits to exploit these modes.

While it was possible for software to switch out the 80-column firmware, making the firmware of a card in slot 3 available with a card in the auxiliary slot, it was not a common thing to do. However, even with the 80-column firmware enabled, slot 3's I/O memory range was still usable, giving it approximately the capability of slot 0 on a II or II plus. This meant that it actually was possible to use slot 3 for things, such as coprocessor cards and language cards, that did not use slot firmware space.

Introduced with the IIe was the DuoDisk, essentially two Disk II 5.25-inch drives in a single enclosure designed to stack between the computer and the monitor, and a new controller card to run it. This controller was (by design) functionally identical to the original Disk II controller but used a different connector, allowing a single cable to control both drives in the DuoDisk. The DuoDisk was plagued by reliability problems, however, and did not catch on as well as the Apple IIe itself.

The Apple IIe was the most popular Apple II ever built and was widely considered the "workhorse" of the line. It also has the distinction of being the longest-lived Apple computer of all time — it was manufactured and sold with only minor changes for nearly eleven years. In that time, following the original, two important variations came to pass known as the Enhanced IIe (four new replacement chips to give it some of the features of the later model Apple IIc, including an upgraded processor called the 65C02) and the Platinum IIe (a modernized new look for the case color to match other Apple products of the era, along with the addition of a built-in numeric keypad). An Enhanced IIe with 128 kB of RAM can be considered the minimum requirement for running most Apple II software released after about 1988.

Two and a half years before the Apple IIe, Apple had produced and marketed a computer called the Apple III for business users. This product was not a success, and Steve Wozniak has been quoted as saying that the Apple III had a 100% failure rate — every single machine manufactured had some kind of fault (a famous Apple technical bulletin recommended dropping the machine vertically onto a table to re-seat the DIP chips in their loose sockets[citation needed]). Still, many of its features were carried over in the design of the Apple IIe, without the manufacturing flaws that led to failures in the Apple III. Among them was the ProDOS operating system, which was based on Apple III's Sophisticated Operating System (SOS).