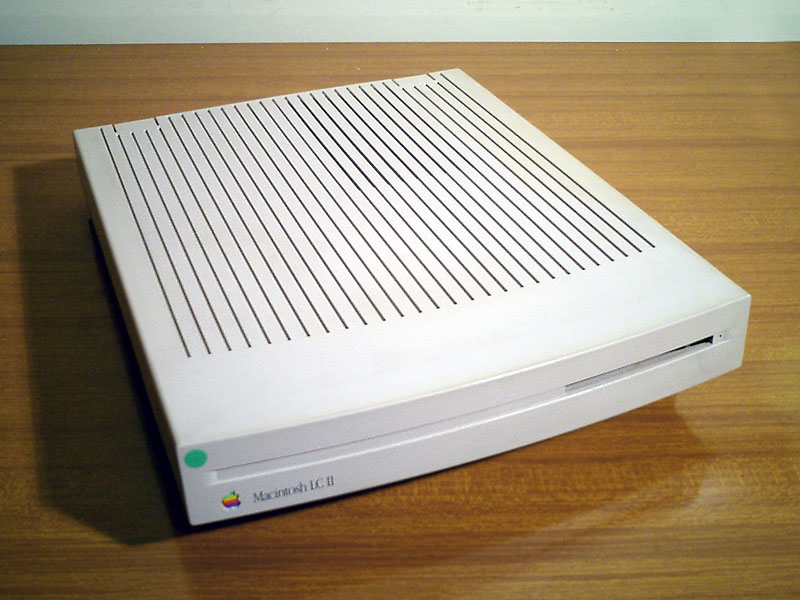 The Macintosh LC (meaning low-cost color) was Apple Computer's product family of low-end consumer Macintosh personal computers in the early 1990s. The original Macintosh LC was released in 1990, primarily for the education and home markets, and notable for being the first affordable color Macintosh to the average first-time computer buyer. Together with the Mac IIsi, it introduced built-in audio input on the Mac. The "LC" name was subsequently used for a line of low-end Macintosh computers for several years and spanned the 68k to PowerPC transition.

Despite the LCs lack of NuBus slots, it did come with a Processor Direct Slot (PDS). This was primarily intended for the Apple IIe Card, which was offered with education models of the LCs. The card allowed the LCs to emulate an Apple IIe. The combination of the low-cost color Macintosh and Apple IIe compatibility was intended to encourage the education market's transition from Apple II models to Macintoshes.

The Mac LC sold well, and in 1991 was replaced by the LC II, which replaced the 68020 with a 68030 (one difference between the Mac II and the Mac LC is the latter had no socket for a 68851 MMU, therefore it could not take advantage of System 7's virtual memory features), and sold even better. This spawned a whole series of LC models, most of which later were sold both with the LC name to the education world and to consumers via traditional Apple dealers, and as Performa to the consumer market via electronics stores, and department stores such as Sears. (For example, the LC 475 was also known as the Performa 475.) All PowerPC-based LC models were sold as "Power Macintosh xxxx LC" (and as "Performa xxxx"). The LC line lived on until the iMac was released in 1998. The LC 580 was notable for being the last desktop Motorola 68k-based Macintosh of any kind. All systems after that one used PowerPC processors and, later, Intel processors.