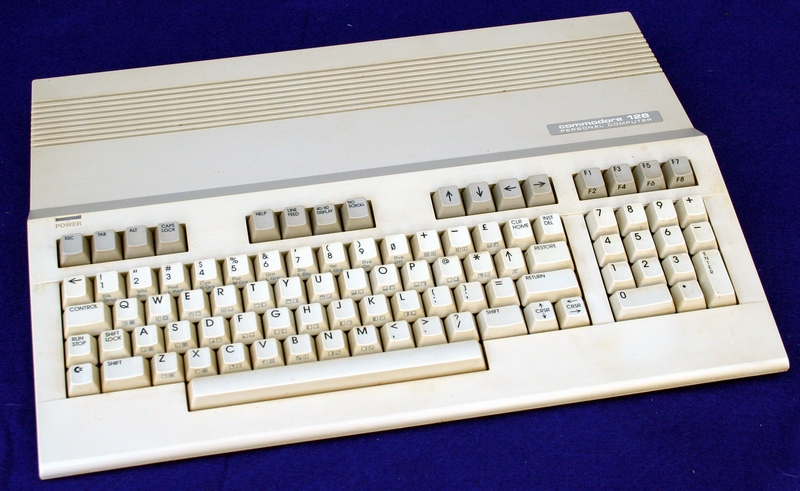 Bought as part of my first larger batch of computers, from a sellout in Halmstad.

The Commodore 128 (C128, CBM 128, C=128) home/personal computer was the last 8-bit machine commercially released by Commodore Business Machines (CBM). Introduced in January of 1985 at the CES in Las Vegas, it appeared three years after its predecessor, the bestselling Commodore 64. The primary hardware designer of the C128 was Bil Herd.

The C128 was a significantly expanded successor to the C64 and unlike the earlier Plus/4, full compatibility with the C64 was retained. The new machine featured 128 KB of RAM, in two 64 KB banks and an 80-column RGBI video output (driven by the 8563 VDC chip with 16 KB dedicated video RAM), as well as a substantially redesigned case and keyboard, which included a numeric keypad. While the 128 still had a 40 column mode, an extra 1K of color RAM was made available to the programmer, as it was multiplexed through memory address 1. The 128's power supply was vastly improved over the 64's unreliable design, being larger and equipped with cooling vents and a replaceable fuse. Instead of the single 6510 microprocessor of the C64, the C128 incorporated a two-CPU design. The primary CPU, the 8502, was a slightly improved version of the 6510 capable of being clocked at 2 MHz. The second CPU was a Zilog Z80 which was used to run CP/M software, as well as to initiate operating mode selection at boot time. The two processors could not run concurrently, thus the C128 was not a multiprocessing system.

The C128 had three operating modes: C128 Mode (native mode), which ran at 1 or 2 MHz with the 8502 CPU and had both 40- and 80-column text modes available; CP/M Mode, which used the Z80 in either 40- or 80-column text mode; and C64 Mode, which was nearly 100 percent compatible with the earlier computer. Selection of these modes was implemented via the Z80 chip. The Z80 controls the bus on initial boot-up and checks to see if there are any C64/C128 cartridges present, and if the Commodore key (C64-mode selector) is active on boot-up. Based on what it finds, it will switch to the appropriate mode of operation.