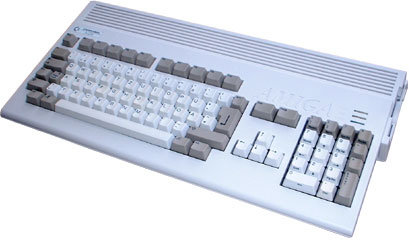 Like its predecessor, the Amiga 500, the A1200 is an all-in-one design incorporating the CPU, keyboard, and disk drives (including, unlike the A500, the option of an internal hard disk drive) in one physical unit.

The system competed directly against the Atari Falcon, but intended as a home computer it inadvertently competed against entry level PCs and 16-bit game consoles. During the first year of its life the system reportedly sold well, but not comparable to game consoles and in a desire to compete Commodore launched the Amiga 1200-based Amiga CD32 game console in June 1993.

The future looked good for the Amiga 1200, but due to poor financial management, Commodore ran into cash flow problems and soon went bankrupt - this despite the fact that the Amiga 1200 and Amiga CD32 both were successful products. Before going bankrupt Commodore had found buyers of around 1 million units of A1200. With Commodore’s demise, the A1200 almost disappeared off the market, but the system got a second chance with Escom's re-launch in 1995.

The new Escom A1200 was almost identical to the original model, the difference being a slightly updated operating system and a floppy disk drive from a different manufacturer. Re-launched at a price of one-hundred and fifty dollars above what it had been sold for two years prior (equal to the 1992 launch price) potential buyers found that the system provided little value and largely ignored the system. After Escom's financial problems, the Amiga 1200 was taken off the market some time during 1996.