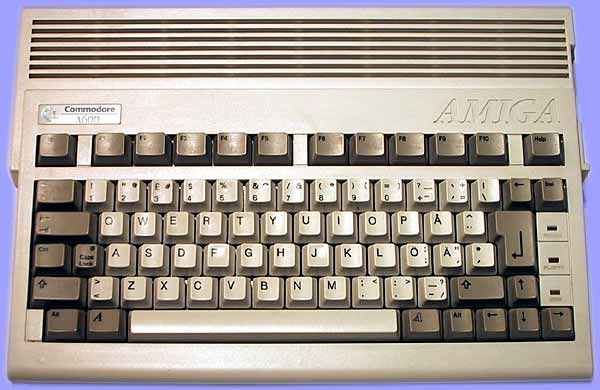 Upgraded 3.0 ROM for HD support.
Bought as part of my first larger batch of computers, from a sellout in Halmstad.

The Amiga 600, also known as the A600 (codenamed "June Bug" after a B-52's song), was a home computer introduced at the CeBIT show in March 1992. The A600 was the final model of the original A500-esque line based around the Motorola 68000 CPU and the ECS chipset. A notable aspect of the A600 was its small size. Lacking a numeric keypad, the A600 was 14" long by 9.5" deep by 3" high and weighed approximately 6 pounds. AmigaOS 2.0 was included which was generally considered more user-friendly than AmigaOS 1.3.

Like the A500 before it, the A600 was aimed at the lower "consumer" end of the market, with the higher end being dominated by the Amiga 3000. It was essentially a redesign of the A500 Plus, with the option of an internal hard disk drive. It was intended by manufacturer Commodore International to revitalize sales of the A500 line before the introduction of the 32-bit Amiga 1200.

According to Dave Haynie, the A600 "was supposed to be $50–$60 cheaper than the A500, but it came in at about that much more expensive than the A500." This is supported by the fact that the A600 was originally to have been numbered the A300, positioned as a budget version of the A500+. In the event, the cost led the machine to be marketed as a replacement for the A500+, requiring a change of number. Early models feature motherboards with the A300 designation.

The Managing Director of Commodore UK, David Pleasance, described the A600 as a "complete and utter screw-up". In comparison to the popular A500 it was considered unexpandable, did not improve on the A500's CPU, was more expensive, and lacked a numeric keypad meaning that some existing software such as flight simulators and application software could not be used without a numerical pad emulator.

An "A600HD" model (with white rather than cream outer casing) was sold with an internal 2.5" ATA hard disk drive of either 20 or 40 MB. This model was marketed as a more "scholarly" version of a home computer hitherto best known for its extensive range of games and retailed at almost double the price of a standard A600. However, this hard disk support introduced some incompatibility with existing Amiga software because the memory used for hard disk control prevented some memory intensive titles from launching without adding additional RAM.

The A600 was the first Amiga model manufactured in the UK. The factory was in Irvine, Scotland. The first ever production A600 — serial number "1" — resided in the Commodore UK Managing Director's office.