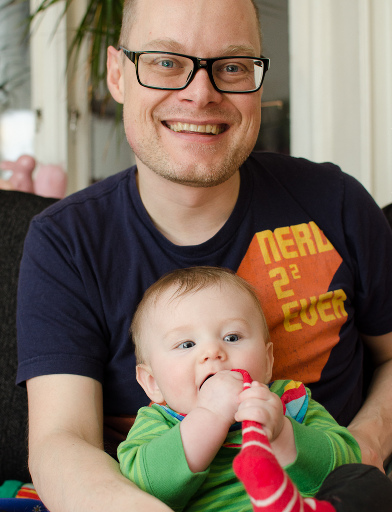 This is the homepage of Anders Piniesjö (previously Karlsson). Those pages are mainly focused around my collection of old computers and videogames, but also contains some personal information.

For over 30 years I have been a dedicated computer nerd. I saw my first computer, a Luxor ABC 80, at the beginning of the 80:s and I was directly hooked. Since then I have had home computers such as Oric 1, Commodore 64, Amiga 500, Macintosh LC and later on many Linux machines. On those computers I did all from programming to playing games. The programming part was important to me and has lead me to a career as professional software developer.

I am now happily married and proud father to a little boy. This takes up most of my spare time. When I manage to find some time I like to shoot photos, travel, do some hobby development projects, travel, find new music and sample beer with friends. I love to go to the Wave Gotik Treffen music festival in Leipzig and have been there around eight times. It is a lovely city and I can't exaggerate how great the festival is!

I currently work at Zenterio AB, after living a year in Berlin where I worked for Zalando. Before that I worked for Opera Software.

One of my strange interests is my collection of old vintage computers and video games. I hope you visit my collection pages to see some of the machines I play and live with!

The main reason why I collect vintage machines is pure nostalgia. I grew up with those machines and wanted them all. When I became a university student i began to long for those old machines again and began to collect. Now I have enough for a museum and I can play with whatever I like!